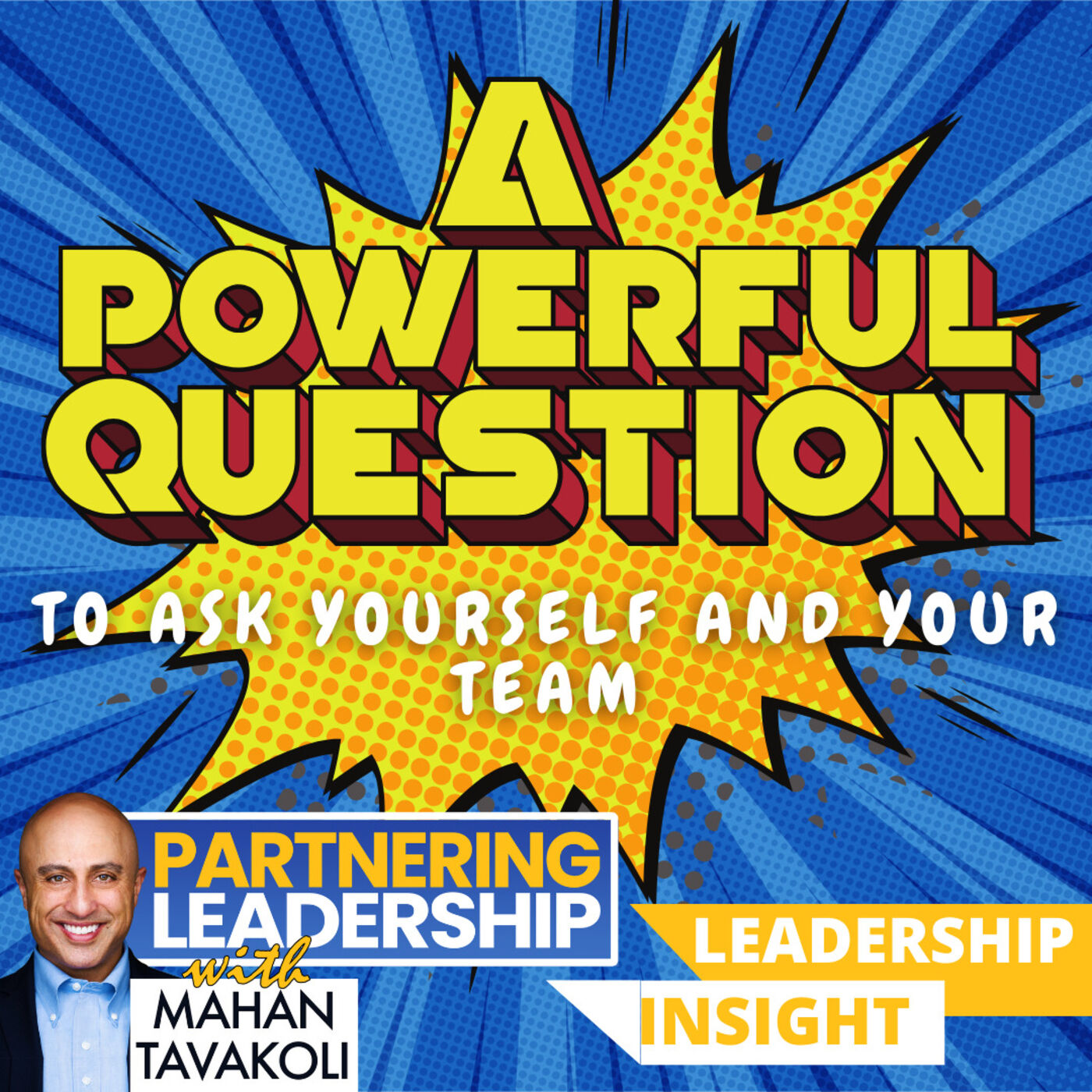 In this episode of Partnering Leadership, Mahan Tavakoli speaks about a critical leadership thinking skill that can be developed by asking ourselves a powerful question. Mahan shares why the complexity of the world requires us to rethink our approach and why asking better questions leads to better answers. Finally, Mahan talks about the power of this question for teams and team decision-making, as well as enabling leaders to demonstrate genuine humility, maturity, and confidence.

-The cognitive biases (heuristics) that get in the way

-Applying the learning to our leadership

- Ed Hess, author of Hyper-Learning: How to Adapt to the Speed of Change (Listen to Ed Hess episode on Partnering Leadership here)

- Mark Bidwell, founder of OutsideLens and host of OutsideVoices podcast

Welcome to partnering leadership. I'm so excited to have you along with me on this journey of learning and growth. Where on Tuesdays we have conversations with magnificent change makers from the greater Washington DC DMV region and on Thursdays with brilliant global thought Leaders.

The first Tuesday of every month, I share with you some of my own leadership perspectives and insights.

And this month it's on one of the most powerful questions we can ask ourselves and our team. Whether in leading others or in our own lives. I'm a big believer that asking better questions leads us to much better answers.

That's why you might have heard me say that questions are the end. Good questions, make us think and challenge our assumptions.

That's part of learning and growth, both for us as individuals and for our teams and organizations.

One of the most powerful questions I've come across is a question that first resonated with me. When I heard Mark Bidwell the podcast host of outside voices ask his guests-

Mark asks each of his guests, what is something significant you have changed your mind about recently?

Such a powerful question. Because changing our minds is really hard. Even when we're introduced to new information and it is a critical survival skill for us as individuals and for our teams and organizations.

If you haven't had a chance yet to listen to my conversation with Azeem Azhar on his book, the exponential age, I would encourage you to do that. You will better understand the exponential technologies that will drastically change our lives, not in the decades ahead, but in the years ahead.

That's why as professor Ed Hess puts it, we need to learn unlearn and relearn at a faster rate than ever before. And that requires us to change our minds.

But changing our minds is hard.

They made a lot of sense in our hunter-gatherer world. However, in a fast-changing environment, they can get into way of effective decision-making and they can get in the way of us changing our minds.

In that, once we have reached the decision, we stick to it rather than taking risks, because we fear losing what we have gained in starting something new. So we stick to the previously held beliefs.

A third one is status quo bias. It's a subtle bias on an emotional level where we want to reduce risk and stick with what's familiar.

And think about it. We don't celebrate people for changing their minds. We ridicule in many instances, leaders that change their minds.

We want people to reach an opinion and stick to it for the rest of their lives.

So in the fast-changing world we live in. The people who are going to thrive, the organizations that thrive will reward changing minds based on new information and will be aware of these heuristics to make sure that they don't stick to previously held beliefs, just because that's the comfortable thing to do.

So I ask again, what is something significant you have changed your mind on recently?

When I asked this from CEOs I work with or teams I work with a lot of times, the first answers end up being more on the surface. Something like, I don't think I should have trusted this individual or that group as much as I did so I've changed my mind about them. Or sometimes people say people from the other political party are a lot more intransigent than I previously thought.

That's not really changing our minds because to a great extent, these statements reaffirm our previous beliefs and saying we were even more correct than we thought previously.

Changing our minds is hard. So what have you changed your mind on?

Amazon founder Jeff Bezos says the ability for a person to change their mind in the face of new evidence is what he believes to be the number one sign of intelligence. I know I have very intelligent listeners. What have you changed your mind on recently whether at work or at home. Something significant.

Stanford university, professor Paul Saffo has a simpler way to think about intelligence.

He says, have a strong opinion, weakly held. So be willing to change it.

So I'll tell you something that I changed my mind on recently. Thanks to interacting with and reading the works of a friend of mine Eduardo BriceÃ±o. Eduardo is a brilliant author writing another book right now has a great Ted talk. I'm going to link to in the show notes on growth mindset.

So what I've changed my mind on is my approach to parenting.

In that one of the frustrations that I had is the societal information that goes to girls, as opposed to boys is very different and specifically as father of two girls, the "princessification" don't look that word up. I made it up, but I still think it's a good word- "princessification" of young girls.

There's nothing wrong with liking princesses. However with that "princessification" in many instances, young girls are complimented on their beauty on their dress rather than on other factors on strength on their smarts.

So what I did as a parent was to think specifically, how can I counter that. So in complimenting my girls, I would always compliment them on being smart on being strong so things that counter much of what they hear or see in society around them.

In listening to Eduardo and reading his work on growth mindset. I realized that is the wrong approach because when you recognize people and in this instance, young kids for being smart for being strong that to a great extent can be counterproductive because it makes them less likely to take chances to take risks and when they don't excel at something, they think to themselves with just because I'm not smart.

So in learning about the growth mindset, I realized that I need to recognize more the effort that is put in rather than the outcome that my girls get to.

So it's not that they are smart. It's that they worked hard for the A Because when they get the B, maybe they could have worked harder or we can work harder for them to raise it to an A.

I give grades as an example, there is a lot more work on a growth mindset. I am going to interview Eduardo when his book comes out.

But all I'm saying is I have drastically changed my mind on the way I interact with my own daughters.

Yes, I was totally wrong in how I approached giving them compliments and that's one of the things that I've changed my mind on.

So it's important for all of us to think about things we have significantly changed our minds on recently.

And when we do this, it can also become a powerful conversation for us to have with our teams.

First, as individual, I facilitated this for teams where the leader shares something significant. She has changed her mind on that, enables others to do the same thing and shows a lot of vulnerability and authenticity in the interactions and makes it okay for other people to own up to having changed their minds.

After doing this as individuals, then the team can have conversations. On what have we changed our mind on as a team? This can be really powerful. Believe me. In my years of interacting with leaders and teams, there are so many instances of people. Bending over backwards and twisting themselves into pretzels, trying to show what they believed initially was right because once they admit that they had it wrong, then their budget is going to get cut. They believe they lose status in the organization. People aren't going to listen to them anymore. And that sets up a very unhealthy cycle of conversations in the organization.

Being willing and able to first talk about what each individual has changed his or her mind on in the team.

And then having a deeper conversation with respect to what have we changed our mind on as a team can be a powerful way of moving forward and in this fast-changing environment. We all need to become much more capable at changing our minds. I love hearing from you. Let me know what you have changed your mind on recently. Keep your comments coming. mahan@mahantavakoli.com. There's a microphone icon on partneringleadership.com. Really enjoy getting those voice messages. Don't forget to follow the podcast. Tuesday conversations with magnificent Changemakers from the greater Washington DC DMV region and Thursday conversations with brilliant global thought leaders.

For now, what is something significant you have changed your mind on recently?