Robert Morgan is the Founder and CEO of Talaria Media. Talaria Media is a creative film and video production company based in Washington, D.C. and Los Angeles that develops and produces a variety of motion picture, television, and digital media content for streaming, broadcast and theatrical release. Talaria Media shares stories that inspires and educates. Talaria Media brings viewers the Pivotal Plays® media platform designed for TV, digital, mobile, radio and live events which shares the most pivotal moments in peoples’ lives across the globe.

Morgan is Founder and President of Pivotal Moments, a 501 (c)(3) public charity on a mission to strengthen mental fitness worldwide by creating, distributing and promoting educational and entertainment programs that inspire and motivate people to become mentally fit, overcome adversity and lead a fulfilling life.

Morgan is the Managing Partner of Caneel, LLC where he provides investments in early-stage companies and provides business advisory services to small and mid size growth companies. Morgan assists startups and consulting and technology companies with corporate development specifically in the areas of corporate strategy, strategic relationships, mergers and acquisitions, innovation, and leadership.

Morgan is a co-founder and Principal investor of GoodSeeker, a technology platform to collect team success stories and use them to grow organizations. These stories attract and engage talent and customers faster with employee generated examples of their brand and values in action.

Prior to forming MorganFranklin Corporation, Morgan served as a Program Manager at the Naval Air Warfare Center responsible for modernization of Presidential communication systems and other tactical communication and information systems for National Security missions of specialized military and government organizations.

Morgan also serves as an advisor to the Penn State Center for Entrepreneurship at the Pennsylvania State University where he received his Bachelor of Science degree in Electrical Engineering in 1989. 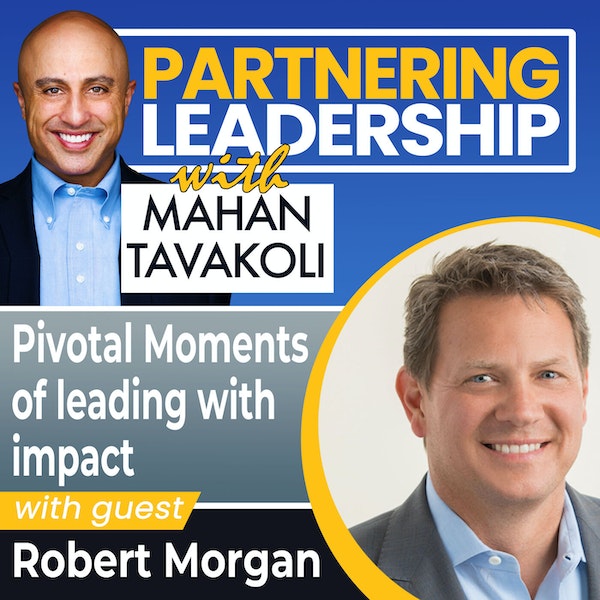 In this episode of Partnering Leadership, Mahan Tavakoli talks with Robert Morgan, founder and CEO of Talaria Media, Pivotal Mome…