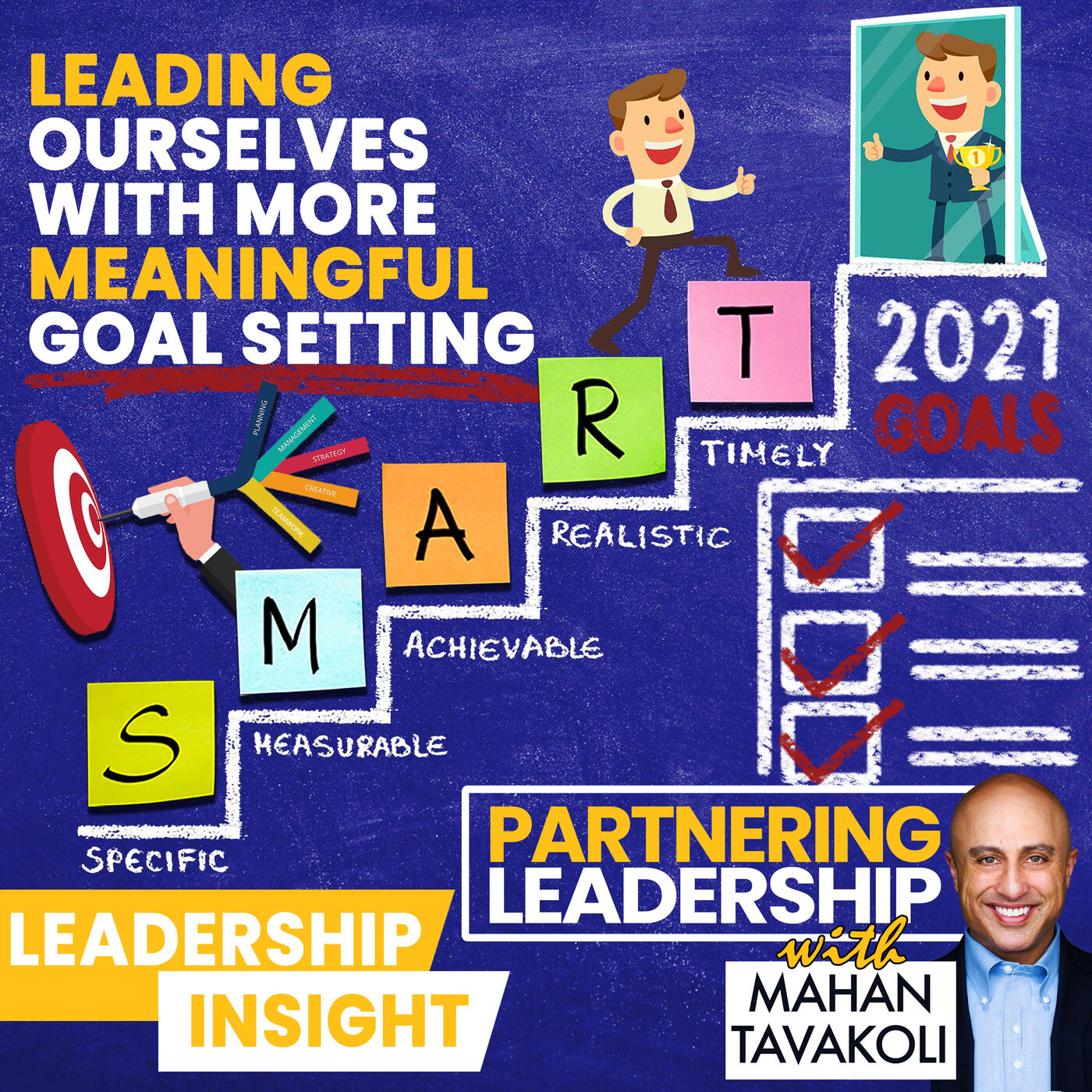 In this episode of Partnering Leadership, Mahan Tavakoli talks about how to think about goals differently and encourages leaders to think about their impact and legacy.

Mahan Tavakoli: Welcome to partnering leadership and the first leadership insight of the year. As you know, we are going to continue every single Tuesday, having conversations with magnificent changemakers from the greater Washington DC, DMV region. So we can learn from their journeys of leadership and life experience so we can become more impactful ourselves.

And then on Thursdays, I will share some of my own leadership, thoughts and insights based on my experience and what I see in the community. And also have conversations with leading thinkers, primarily authors, whose leadership insights and books can bring value to the partnering leadership community.

This is the time where a lot of us think about goal setting. And goals are really important. Actually many people said new year's resolutions and it wouldn't come as a surprise that more than 70% of our goals end up having to do with diet and exercise. There is nothing wrong with that. I could, at this point, lose a couple of pounds myself, so should set some of those goals too.

Goals are important, whether on the personal front or professional front, and there are a lot of great frameworks on goal setting, smart goals, make them specific, measurable, attainable, realistic, put a timeframe to them. However, as we reflect on goal setting this time around. I'm going to challenge all of us to think a little differently.

I love the example of Alfred Nobel. When talking about Nobel, almost every single person, associates, the name with the Nobel peace prize or the other prizes that are awarded in his name.  You might be surprised to know that ,actually, Nobel was the person that invented dynamite, had armament factories, and was famous for developing all kinds of explosives that were associated with war, death, and destruction.

He didn't want that to be the legacy that he would leave behind which is why he invested the rest of his time and his resources in trying to be associated with good and with peace rather than with death and destruction. Now, we don't all have to be that grand in our thinking, but I know when we set goals, a lot of times we think about the next professional step in our lives.

The next thing we need to do to become a little bit healthier or lose a couple of pounds. How about this year, thinking a little differently. How about using the crisis to think, who do we really want to become? What is the legacy we want to leave behind? If we have one more week, one more month, one more year, what is our legacy going to be like? If they write our obituary , mistakenly I hope, a year from now, what will be our legacy? How will our families speak of us? How will our team members speak of us? How will the people we associate with speak of us?

So as you go through your goal-setting process this year, add that, take some time, reflect on it and think what you want your legacy to be. Because at the end of the day, that becomes even more important in guiding you and guiding your actions toward the kind of person you want to become.

Another story that resonated with me is of Bronnie Ware. She worked in palliative care and took care of the needs of people that were dying. So she asked them about the regrets they had and wrote an article that was read millions of times all around the globe.

So there's nothing wrong with setting goals about losing weight and getting the job promotion, something that starts at a later stage and later date when we achieve something. It's not when we graduate from school, it doesn't begin when we get married. It doesn't begin when we have kids and it doesn't start when the kids go to college or it sure as heck doesn't start when we retire.

So this year, as you're setting your goals, after setting the goals around weight loss and everything else, think about what kind of impact you want to have, what kind of difference you want to make so you can lead a life without regrets.

Feel free to connect with me on your goals and the legacy you want to leave, Mahan@mahantavakoli.com and there's a microphone icon on partneringleadership.com.

You can leave me voice messages there. And for those of you who are enjoying these episodes, please don't forget to follow and subscribe depending on your platform of choice. That way you will be first to be notified of new episodes rate and review on Apple podcasts and share these episodes with a friend or colleague.

Help other people to achieve more purpose, have a greater impact in their leadership journeys.