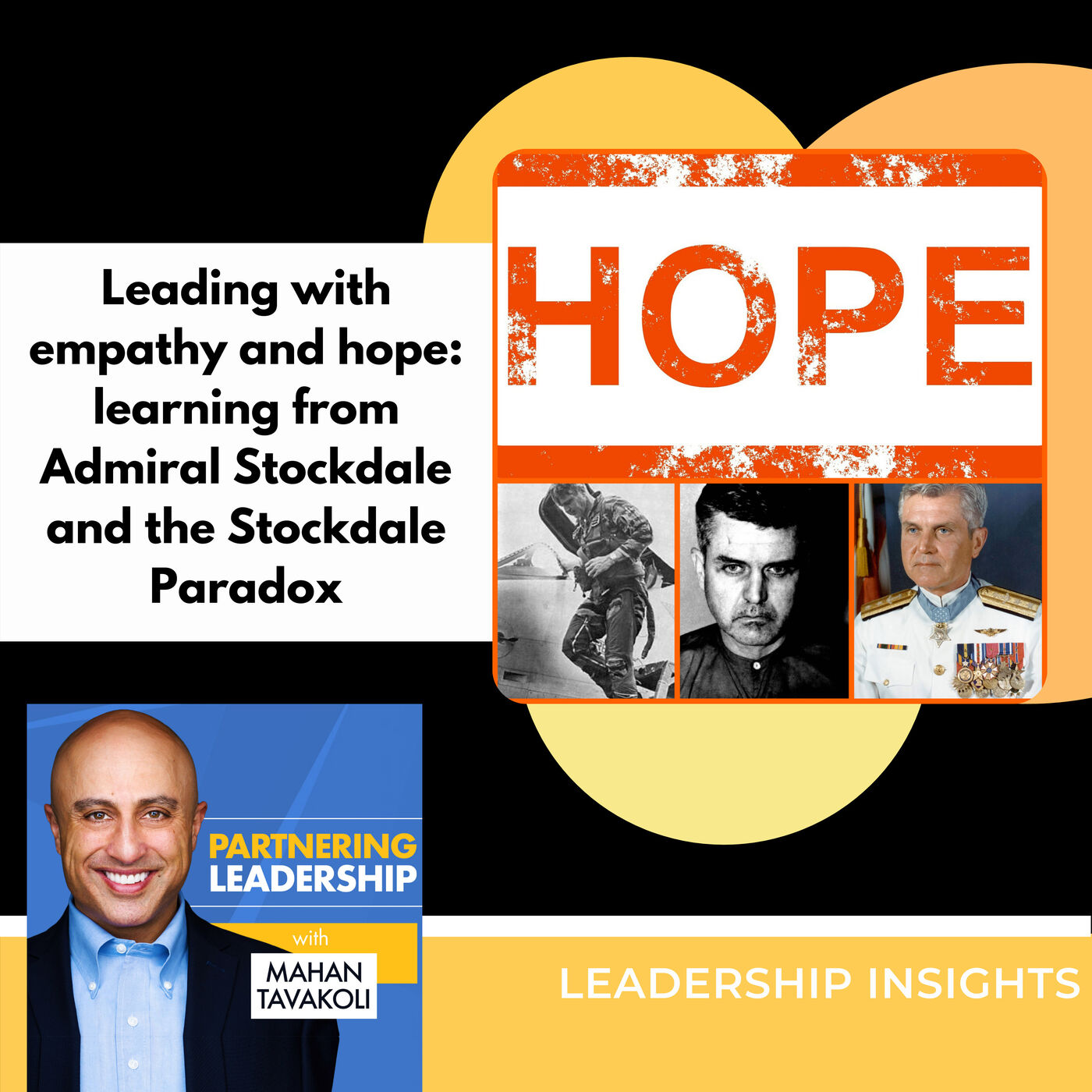 In this episode of Partnering Leadership, Mahan Tavakoli talks about the Stockdale Paradox, the difference between hope and optimism, and the necessity for antifragility in leading your organization and team during times of crisis.

The story of courage and patriotism of Admiral Stockdale

Understanding the difference between optimism and maintaining hope

How to lead with hope

Mahan Tavakoli: Welcome to the Partnering Leadership podcast. I'm really excited to have you along on this journey of learning and growth. I have been really enjoying the conversations with these magnificent leaders. And I know you are also, based on all the positive feedback I've been getting from you. So thank you very much for that. Keep those coming.

Make sure you subscribe and follow the podcast. That ensures that when we do new podcast episodes, you're updated first. And when you get a chance, go ahead, especially on Apple podcasts, do a rating and review. We now have listeners all across the US and on five continents globally. So thrilled to take you along on these conversations with me.

As I've also mentioned once a month, the first Thursday of every month, I will share some of my own leadership insights, some of my own thoughts. And one that I think is really important for us to think about right now is about, how leaders need to think about and communicate about the current crisis and what we are truly in for.

And the example I love is of Admiral Stockdale. For any of you who might not be familiar with Admiral Stockdale, he was actually shot down over Vietnam on September 9th, 1965. He was flying a mission. His plane was shot. So he parachuted down into a village. Now Stockdale was severely beaten and taken prisoner.

He ended up being a prisoner at Hanoi Hilton for the next seven and a half years. He was routinely denied medical attention and his legs were severely damaged both during the capture and they were broken twice after his capture in the prison camp. So think about what Admiral Stockdale had to go through.

Also, when he was told by his captors that he was going to be paraded in public. Stockdale actually slit his scalp with a razor to purposely disfigure himself so his captors couldn't use him as propaganda. When they covered it with a hat, he beat himself with a stool until his face was swollen beyond recognition. Think about the courage and patriotism of this man.

So Jim Collins asked Admiral Stockdale about how he was able to survive the prison camp for seven and a half years in Vietnam. And why many others didn't survive. And Stockdale's answer became known as the Stockdale paradox.

That's an important lesson. You must never confuse faith that you will prevail in the end, which you can never afford to lose with the discipline to confront the most brutal facts of your current reality, whatever they might be. Isn't that a brilliant statement from Admiral Stockdale?

No, it is not pessimism. It is not saying that things will never get better. The world has changed. Everything has changed forever, but it is having an understanding that there is a difference between naive optimism and maintaining hope. There is a great thinker, author, Gleb Tsipursky that talks about what we have ahead of us in a pandemic. The optimistic scenario, the likely scenario, and the pessimistic scenario.

His optimistic scenario says we're going to be facing a couple of years of this level of disruption. And then his most likely scenario has it at three to five and his pessimistic scenario, obviously beyond that.

Meaning for those people that are saying, "Oh boy, I am glad 2020 is over. 2021 is going to be a great year because everything will be behind us." Well, not necessarily. We're going to face a lot more of the same challenges so leaders need to recognize that. And then, therefore, think about how we can focus during this disruption on antifragility and giving hope that we can work hard. We can make it through this. And at some point in the future, when things do settle down, when things do become better, we can look back at the progress we made.

The learning, the growth, the anti-fragility. Be glad that the disruptive days are over, but also be proud of what we've been able to work on and achieve together. So keep the Stockdale paradox in mind. Have hope, have that energy, have that excitement. Be an anti-fragile leader. But don't necessarily try to be overly optimistic. Giving a message of optimism that ends up disappointing yourself, ends up disappointing your team members as the different milestones come and go.

I look forward to hearing your comments, your thoughts, your examples of how you as leaders are sharing hope with people in your organizations, on the partnering leadership.com website. There is an icon of a microphone. Feel free to record a message there for me, or email me at Mahan@mahavatavakoli.com.

Look forward to hearing your thoughts and your insights, because this is a community of leaders helping each other, make it through the crisis, becomes stronger and better as a result.