The Power of Subtraction: How You Can Do More With Less by Starting a Stop Doing List | Mahan Tavakoli Partnering Leadership Insight 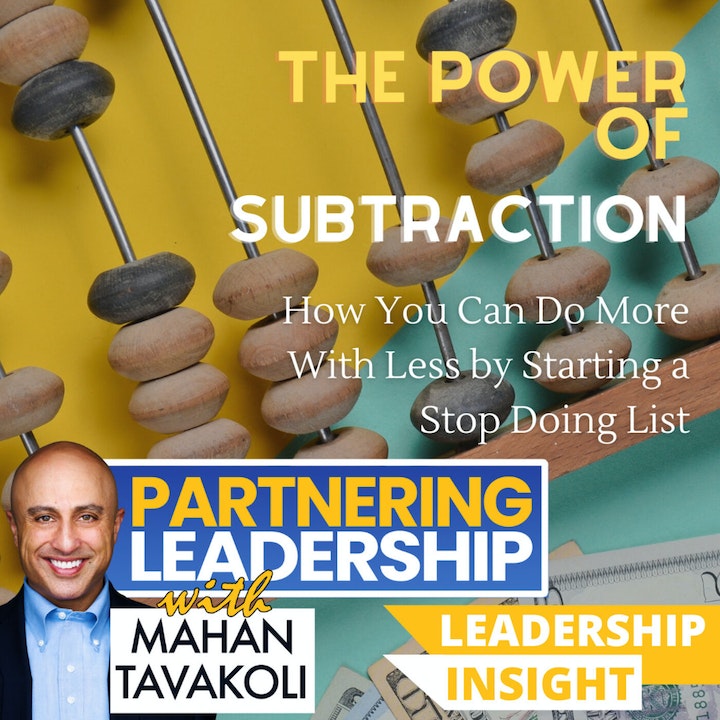 In this episode of Partnering Leadership, Mahan Tavakoli shares an unlikely goal-setting strategy for your team in the year 2022, subtracting goals instead of adding more. In addition, Mahan shares insights from Leidy Klotz's book Subtract: The Untapped Science of Less on why eliminating certain goals will lead you to achieve more and have a more significant impact.

- Why you should stop adding goals and instead start subtracting them

- Why removing goals and priorities is so tricky but necessary.

- The power of subtraction: going beyond just saying no and reflecting on what needs to be eliminated

- Patrick James McGinnis, venture capitalist and author best known for coining the term "fear of missing out" or "FOMO."

- Subtract: The Untapped Science of Less by Leidy Klotz

Welcome to partnering leadership and happy new year. I am so excited to have you along with me on this journey of learning and growth.

We're on Tuesdays. We have conversations with magnificent change-makers from the greater Washington DC DMV region, and then on Thursdays with brilliant global thought leaders.

Leaders like David Rubinstein, Jean Case, Ram Charan John Kotter the list goes on to a week, and it's an absolute honor having these conversations. More than that it is an honor to share these conversations with you, knowing that you are listening to these, sharing them with your friends and colleagues, and that has helped this podcast grow all across the country and in over 78 countries around the globe. So I want to take a minute and thank you for your purpose-driven leadership and for the content you seek to consume.

It's a little bit like when we have junk food, a lot of times after having junk food, I don't feel as good about myself as I do after having had healthier food, having studied nutrition I better feel that way. Right. After having exercised a lot of times, I feel better about myself. Well, see this as exercise and healthy food for your brain, for your leadership for your purpose-driven soul, wanting to have an impact on your team, your organization, and the community, so I am thrilled to have you come along this journey.

I also love hearing from you. Keep your comments coming. Mahan@mahantavakoli.com . There's a microphone icon on partneringleadership.com. You can leave voice messages for me there. Don't forget to follow the podcast on your platform of choice and those of you that listened to it on Apple podcasts, you can leave a rating and review that's at the bottom of your feet. Spotify has just added ratings too. It's a little easier to find it that's on top of your feet, but those ratings help more people find these conversations and benefit from.

Now as you know, once a month, I also do a solo episode where I talk about some of the things I believe are important to leadership. And this month I want to talk about goal setting while it is January new year's resolutions, but a different angle to goal setting, whether it is for us personally, professionally, or for our organizations as we plan.

It's so fascinating how, when we think about fresh starts at the beginning of the year, a big part of our planning and goal setting is always thinking in terms of addition, rather than also balancing that addition with subtraction.

Many of you know, I spend my time consulting and working with organizations on their strategic planning and then most specifically getting alignment on the strategy to execution. And one of the big challenges that organizational leaders have is not to constantly be in the additive mode, adding projects, adding strategies without intentionally also subtract. So there are a lot of heuristics and human biases that contribute to us wanting to add.

Daniel Conaman talks about loss aversion. There is a great conversation I have coming up in February with Patrick McGinnis, who is the person that came up with a term formal fear of missing out and FOBO fear of better option. So we want to make sure we don't miss out. We want to hold on to things. So those biases play a role.

Now Leidy klutz, who is a professor in the University of Virginia has also written a great book called Subtract: The Untapped Science of Less, and in it, he also references a study that he had done, which was published in the Journal of nature. Now in the study, the participants were told to improvise lego project, so it could stand without collapsing. And then they were given an incentive, which was, they would earn a dollar if they successfully completed this task. But each added piece of lego would cost them 10 cents. So in essence, They would be incentivized to subtract blocks to solve the problem and disincentivized to add blocks.

Now the vast majority of participants kept adding blocks. So they decided to study this differently. they decided to actually tell people and prompt them on the fact that subtraction was an option. Even after doing that only 41% subtracted blocks. And after repeated prompts saying that folks removing pieces is free and costs nothing 61% subtracted.

So still at that point, there were people that were hesitant to subtract blocks because we have a mindset that we want to add and we believe addition is strengthening. Addition is powerful. While in many instances, subtraction can be more powerful and this is not just about saying no. What I urge people to do, whether, for their own personal goals, professional goals, teams and organizations is to go beyond saying no. It's taking time to totally reflect on, specifically what needs to be eliminated. It is not for example, for the individual just coming endless repetition of saying I'm going to use social media less, or I'm going to eat less junk food. While all of those things are important. It is tapping, as Leidy says to the Untap Science of Less, and to do that, it requires intentionality.

Leidy goes on to say our failure to subtract is a root cause of our cluttered calendars, closets, and inboxes, which are the symptoms. And Jim Collins even says excess of opportunities is a big cause of failure for organizations.

And believe me, as someone who's spent his time working on organizational strategy, that is a big contributor to lack of effectiveness of strategy and how a lot of organizations are managed where things are continually added with that intentional focus on subtraction.

So I challenge you this year when you're thinking about your personal professional team and organizational goals. Intentionally tap into the power of subtraction and come up with a stop doing list. Because without a stop doing this, our stress levels continue to go up. What we do is then decided by circumstances and the urgency of the now, rather than focusing on what matters most. At the beginning of this new year, I want you to start a new tradition, set aside some time to sit down and think about all the crud that has accumulated in your life.

Sit down with your team and talk about all the crud that has built up in terms of team practices. And add a stop doing list that we'll add more power to all that you want to get done for greater impact.

I love hearing your feedback. As you start your stop doing list. Keep your comments coming, mahan@mahantavakoli.com and I'm wishing 2020 to be a healthy, prosperous purpose-driven and impactful year for all of you the wonderful listeners of Partnering Leadership Podcast.