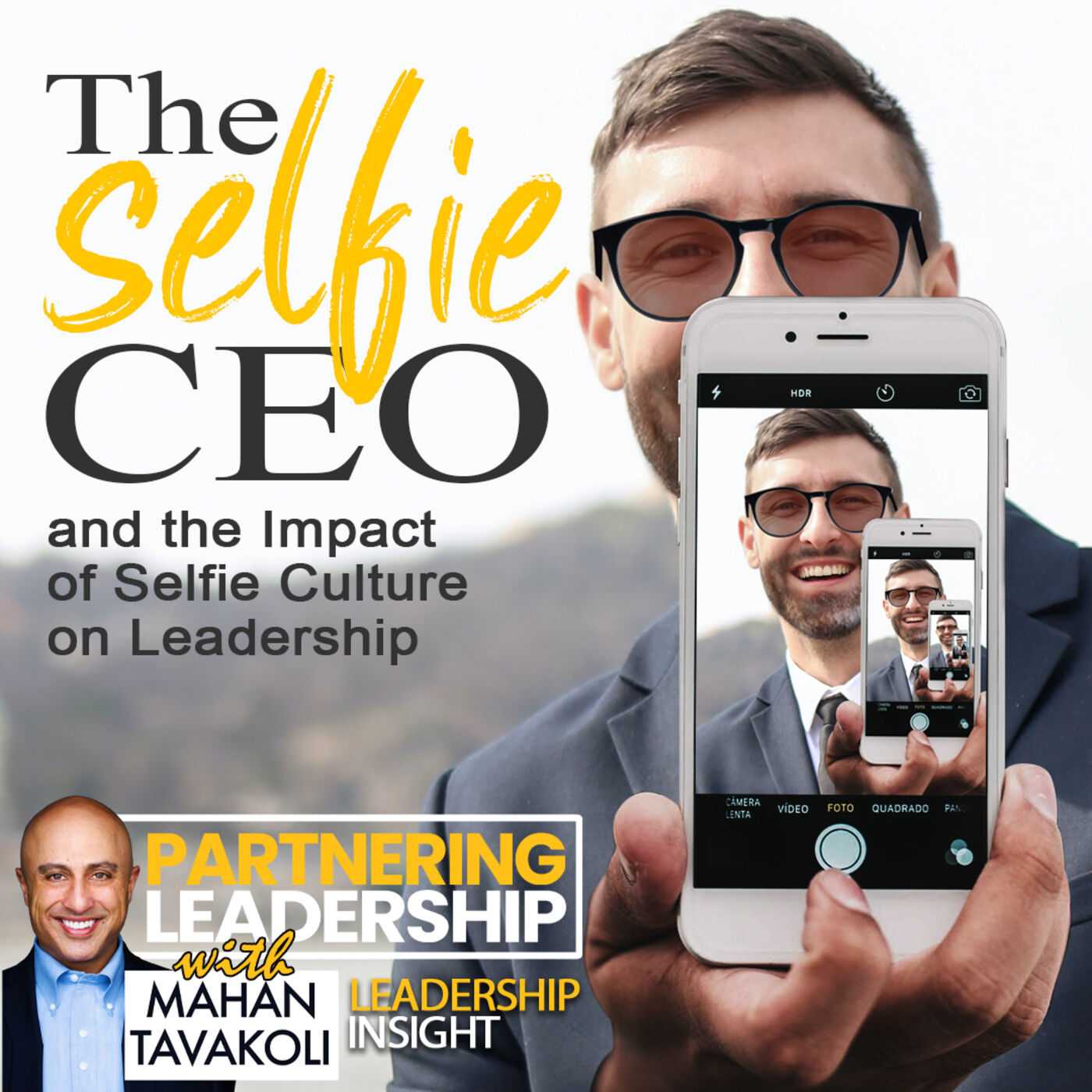 In this episode of Partnering Leadership, Mahan Tavakoli speaks about the impact of selfie culture on leadership.  Mahan shares thoughts on selfie leadership, servant leadership, and partnering leaders' fundamental mindset and behaviors.  From storytelling to the pictures on social media, how we think about leadership impacts attitudes and behaviors.

-What contributes to selfie leadership

-The impact of selfie leaders on their team and organization

-The need for a more balanced view and practices of leadership

-How to be a partner leader rather than a selfie leader

The first Tuesday of every month, I share with you some of my own leadership, thoughts and perspectives based on what I'm seeing in my interactions with my clients, in the community and also your comments and observations. So keep those coming- mahan@mahantavakoli.com. There's also a microphone icon on partnering leadership.com. You can leave voice messages for me there.

Now, I got an email from Beth and cracked up because Beth had shared with me the example of a CEO that consistently shares images of himself, in many instances almost comical images of him looking in the camera, different power poses, with his own quotes, and she had asked whether this is the right approach to leadership. I think she probably knew what I was going to say in response.

This made me think about the selfie CEO and the impact of selfie culture on leadership.

Now, there have been many examples of egotistical leaders throughout history, and there are some exceptional geniuses that can get away with that approach. However, both for Beth and everyone else. I truly believe that's the wrong way to think about leadership.

I have tremendous respect for that. However, as I mentioned in my podcast trailer, back when I started this in 2020, I believe in a more balanced view of leadership. Closer to a partnership that helps all parties become better and leave a positive imprint on the world around them.

But I know that the issue isn't with too many servant leaders or partner leaders running around. The problem is with egotistical leaders or what I like to call selfie leaders. Leaders who continually celebrate themselves. Once in a while, thanking the little people for their contribution. However, leaders whose actions reflect an egotistical view of the world. They are at the center of universe and everyone else revolves around them. This is in my view, a lot of times motivated by deficits in their own psychological makeup and confidence. They need to be loved, need to be accepted, need to feel important.

We all need some of that. There is nothing wrong with that. The question is always the extent to which we need that and prioritize that. Yes, it's okay to take selfies, however, if every picture we take is a selfie with us at the center of it. If we view every interaction with us as the center of it, that's where the problem begins.

And that's the challenge that some leaders have selfie leaders see themselves at the center of the story, rather than part of the story.

You have heard from me in different episodes, talking about Joseph Campbell's heroes journey. And I'll spend some time in one of the upcoming solo episodes, talking more about his brilliant insights on how he captured the arc of a hero's journey storyline and how it's been used across cultures for millennia, where there is a character that has a problem and then that character typically meets a guide who gives them a plan and calls them to action and that action either results in success or failure, most often success.

Selfie leaders see themselves as the hero in every story. The hero that accomplishes great things or the hero that has been wronged rather than one person playing a role, whether as the guide or as a supporting character in the story.

Selfie leaders want to lift themselves up and take their credit while partnering leaders don't care as much about the credit, knowing that it really takes a winning partnership. This is not just words. It's a fundamental mindset that we need to have.

Being confident and humble are not mutually exclusive. So with this mindset, we can be confident and we should- actually, the people who are most confident have genuine humility, recognizing the real value of others, which is why they don't see themselves always at the center of the story

I think Lao Tzu said it beautifully, a leader is best when people barely know he exists. When his work is done, his aim fulfilled. They will say we did it ourselves.

I was fortunate for about a dozen years to report to a leader like this. David Fagiano, who was the chief operating officer of Dale Carnegie was just this kind of leader. I interviewed him for the podcast back in December 2020.

While a lot of people that didn't interact with David closely misunderstood him. Those of us who worked with him closely loved him and there are so many reasons for that.

David's favorite analogy on leadership was that of a flock of geese. No single goose stays at the front of the flock as they are flying. Each goose plays a role of great value in getting the flock to its destination.

Both when David was my boss and ever since I've been reflecting on the fact that he wouldn't position himself as the hero, most of the time he would elevate one or more of the team members as the hero. David by no means, lacks confidence. However, because of that confidence, he was able to shine the spotlight on his team and his people rather than himself.

Then, on the other hand, I see a CEO who keeps posting his own images that remind me of Chris Farley's character, Matt Foley on Saturday night live the CEO posting images of himself, and his own quotes is almost comical and reflective of his actions.

Now, I don't think egotistical selfie leaders are the kind of people who would be listening to this podcast anyway. They believe that they know it all. However, I imagine if you got them to listen to this, they would not see themselves as being selfie leaders. That's why I love Richard Feynman's quote. The first principle is that you must not fool yourself and you are the easiest person to fool.

This is a challenge to all of us, to ensure that in our leadership, we have confident humility, and first shift our mindset and beliefs and then make sure our actions follow.

I love hearing from you. Keep your comments coming. I Have lots of great conversations lined up for you Tuesdays with change makers, Thursdays with the thought leaders.

Don't forget to follow the podcast on your favorite platform and focus on how you can be more of a partnering leader rather than a selfie leader.