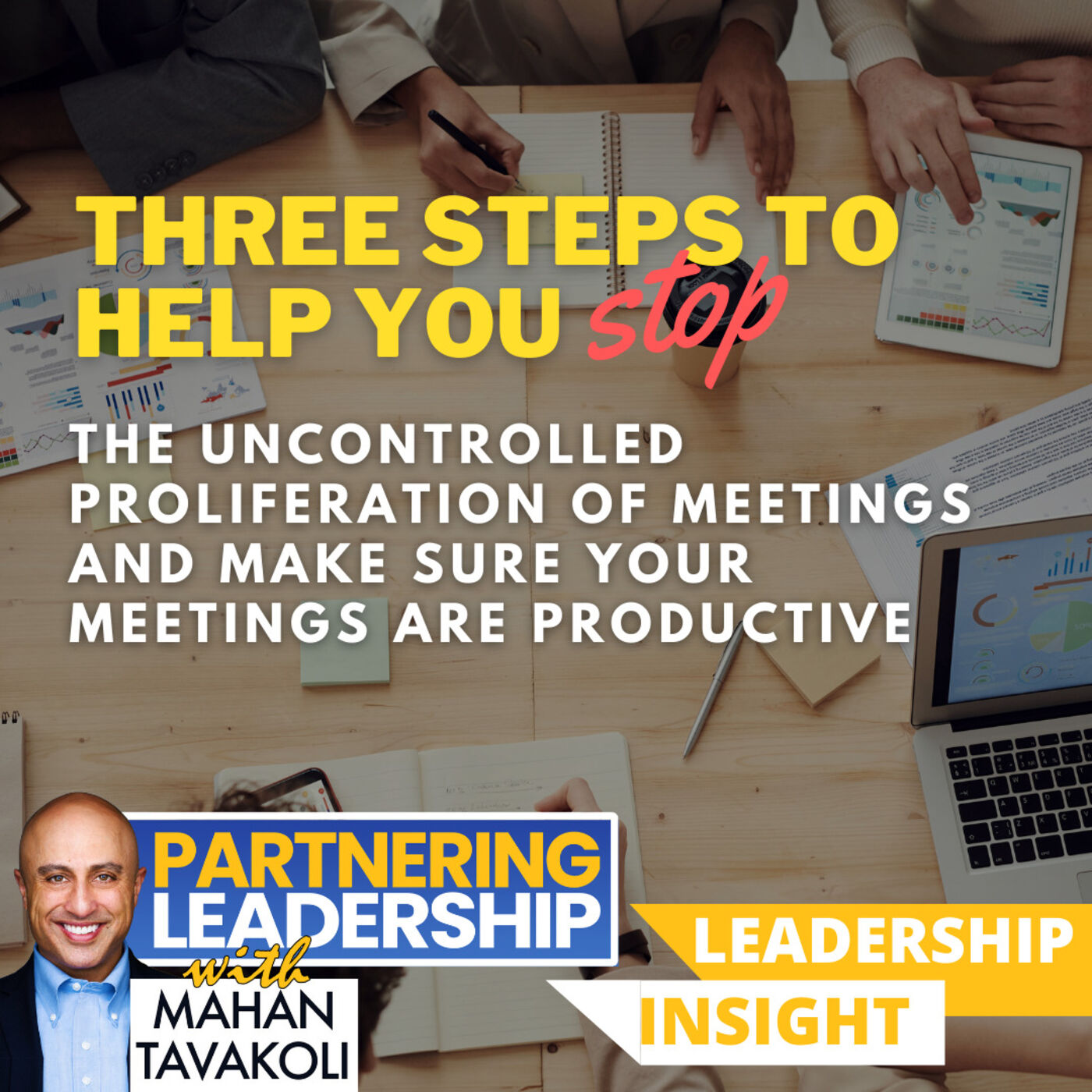 In this episode of Partnering Leadership, Mahan Tavakoli shares why professionals are spending more time in meetings than ever before and what leaders of organizations and teams can do to combat overscheduling of meetings and meeting overwhelm. Mahan goes through a three-step process that can get you started to a more manageable number of meetings and more productive collaboration.

- Why transitioning to meeting free days might not be good enough

- Why clarity behind the intention of a scheduled meeting matters

- Synchronous vs. asynchronous communication and which works best for meetings and knowledge management

Welcome to partnering leadership. I'm so excited to have you along with me on this journey of learning and growth most especially because to me, it shows that you are a person with a growth mindset who continually seeks to learn more, apply more, and have a greater impact.

So this is a pursuit for all of us looking to learn more, looking to apply more, and make a bigger difference as an ongoing journey, rather than an end in and of itself.

It's really thrilling as I see. So many of you coming along with me on this journey, sharing these episodes with your friends and colleagues and helping all of us grow so we become more impactful together.

As you also know, once a month, I share with you my own leadership perspectives and insights.

And this month I wanted to talk about meetings and the insanity that is going on with the number of meetings that are being scheduled.

I can spend hours on how to run effective meetings. Sometimes we work with clients on that, but there are a couple of key elements that I want to share with you.

Early on in the pandemic. Most people were thrilled with the fact that they got a couple of hours of commute time back in their lives. And people were talking about the extra time they were spending walking or having meals with their families because they weren't spending that time commuting.

Now the unfortunate truth is the average number of hours worked per day has gone up. Much of it in meetings. So those same people are more stressed than ever, even though they don't have their commute back in their lives.

Think about that incredible increase. And in many instances, meetings that shouldn't be held and meetings that are ineffective with respect to intent and the way they are conducted.

Some organizations are trying meeting-free days. That can help, they say no meetings on Mondays, no meetings on Fridays, or pick your day of the week.

However, it's not addressing the root cause it's addressing one of the symptoms. In some of the organizations I'm familiar with. People don't do meetings on Mondays, but some of those same meetings have been rescheduled to Tuesdays or another day of the week.

The point should be to reflect on the process and approach to meetings. And in order to do. I asked you to think about doing three things.

First, declare a meeting bankrupt. Yes, a meeting bankruptcy. So not going on with the same weekly meeting that has scheduled the same time of the week for the past, however many years, but starting with a blank sheet of paper. Start with a bankruptcy, making sure that every single meeting that gets back onto schedule has clear intention behind it.

So the first thing to think about after declaring bankruptcy is the intentionality with respect to the meeting. And then the most important point after that is to think through whether the communication could have just as easily been done through asynchronous or synchronous means.

Some of those can also be poorly managed. However, asynchronous communication ends up over a period of time doing a better job with knowledge management and requiring less intensive time from each member of the team.

What I challenge all of my clients to do is in every meeting, both in scheduling the meeting and while going through the meeting to ask themselves could this information have been shared just as easily through a synchronous means. And if the answer to that is yes, move the information to asynchronous, keep meetings and synchronous communication only for times when all participants need to actively engage.

This is really important to keep in mind as you plan your meetings. So here are the three steps I recommend for you to transition from meeting overwhelm to a more manageable approach to meeting.

Even before the pandemic, 71% of managers thought that meetings were costly and unproductive. Those numbers have now gone through the roof. So if you think your organization is handling it better, think again. Declare meeting bankruptcy, focus on intentionality behind the meetings, and constantly ask, can this information be shared through asynchronous means? If so, move it to asynchronous channels and if not, keep it in a meeting format, which engages everyone through synchronous communication.

I look forward to hearing from you. Keep your comments coming. Mohan, Mohan tavakoli.com. There's a microphone icon on partnering leadership.com. Really enjoy getting those voice messages. Don't forget to follow the podcast. Tuesday conversations with magnificent change-makers from the greater Washington DC DMV region and Thursday conversations with brilliant Global Thought Leaders.