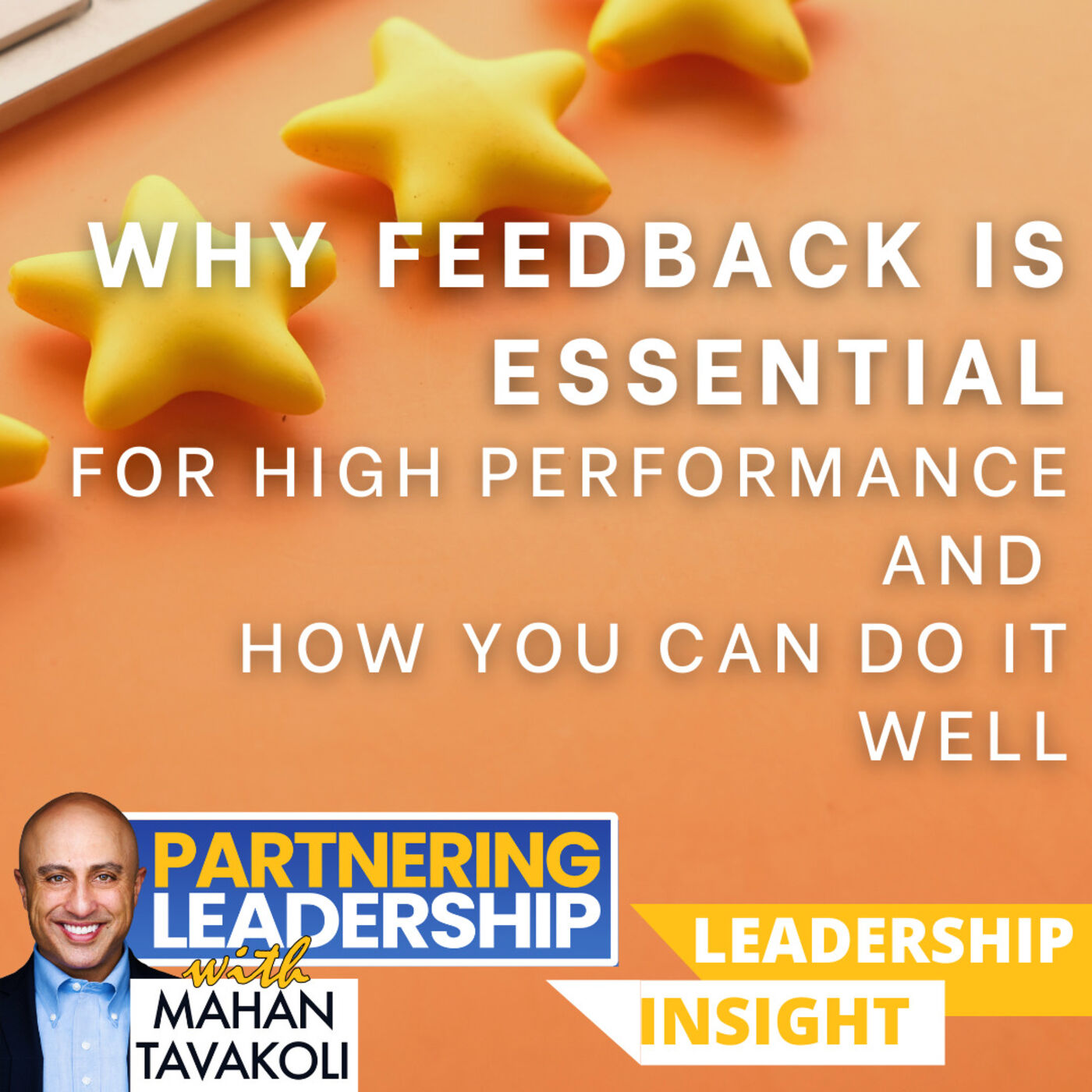 In this episode of Partnering Leadership, Mahan Tavakoli shares his thoughts and research on the importance of providing regular feedback in the work environment. Mahan shares why many leaders avoid giving feedback and how to incorporate it into frequent interactions. Finally, Mahan shares tips on how to provide better and more productive feedback.

- The thin line between feedback and coaching

- How to provide feedback rather than avoid it

- The challenges with feedback in the virtual environment

-  Importance of relationship in feedback

- How and why you should solicit feedback

- Dr. John Gottman, professor emeritus of psychology at the University of Washington

Welcome to partnering leadership. I'm really excited to have you along with me on this journey of learning and growth. Where on Tuesdays we have conversations with magnificent change makers from the greater Washington DC DMV region and on Thursdays with brilliant global thought leaders.

I am so honored and excited to have all of these wonderful guest. Sharing their leadership lessons and journeys with a partnering leadership community. And more than that, I am thrilled and honored as so many of you are listening to these episodes, sharing them with your friends and colleagues, helping the podcast grow across the country and across the globe with lots of listeners, binge listening from the very first episode on.

This says a lot to me about you, your desire to continually learn and grow that growth mindset, which is so important, as well as the fact that you prioritize purpose-driven leadership. So I appreciate all that you have done in helping the podcast grow and all you continue to do in your own journey of learning and growth.

Some people twist themselves into pretzel, debating whether feedback is coaching. You know what the reality is. Coaching and feedback can be seen as two overlapping circles.

And let me say that there is way too little of both happening in organizations. However, in this solo episode, I will share with you. Some thoughts with respect to feedback specifically, there is also a webinar I will link to that I did along with a colleague of mine, for Georgetown, where we spoke more in depth about feedback.

Feedback is important however, it's so poorly done, and there are so many potential pitfalls that some people say don't give your team members feedback. I believe just because it's hard doesn't mean you shouldn't do it. If anything, the healthiest work cultures where people flourish include regular and consistent feedback in a psychologically safe environment. So rather than avoiding. Learn how to do it right.

I'm sure you already know that. So you're nodding and say, yes, I know feedback is important. I'm already providing my team lots of feedback, but I have to tell you, even before the pandemic, when managers were asked if they gave enough feedback to their employees, 58% said that they did while on the other side, 65% of employees felt they were not getting enough feedback and as I mentioned, this data is from before the pandemic.

Based on what I see in most organizations, the amount of feedback that managers are sharing, has gone down in a virtual environment and will continue to be a challenge in a hybrid work environment. We think we give enough feedback while our team members believe we don't, which is why the first point is don't dismiss this as something for other leaders and other people. We all need to give more feedback to our team members and colleagues so make it a priority.

Now in giving feedback, we need to keep in mind that the relationship is most important. Whether for affirming feedback or when we need to give corrective feedback, just think about it. If you're walking down the street and someone comes up to you and tells you something positive, you immediately become suspicious of what that person wants right? Because you don't have a relationship with that person and you start thinking about what do they want from me, what's going on. So even when the feedback is positive, it is not necessarily taken well, which is why relationship is critical for any form of feedback. So one of the things that you need to consistently focus in on is how to build more robust relationships, which enable better feedback.

And part of it is that when I talk about feedback, A lot of times people think about negative feedback and that's not the way feedback should work, whether it's with Doctor Gottman studies on healthy marriages or organizational culture studies published in the Harvard business review. They all showed that in the healthiest relationship. And in the healthiest, more productive organizational cultures, the ratio of positive feedback to correct the feedback is at least five to one. That means for every one corrective feedback, there is at the very least five positive feedback points that are shared with the other team members or the other individual.

Don't think about feedback as only being corrective and what the person needs to do differently or better. Feedback needs to primarily be positive.

Doing a great job. Keep up the good work. Those are all nice things to say. Don't count those as the five pieces of feedback that are positive you're giving your team members for every corrective one that you are giving. Feedback is important to be part of your daily interactions. When it's positive, it's nice. When a shared in front of other people, while it doesn't necessarily have to be when it's corrective, it should be done in one-on-one setting.

Therefore it's essential that every one of your one-on-one meeting. Incorporates a portion of time where you give feedback and you solicit feedback. So I have mentioned soliciting feedback a couple of times, that's one of the most important aspects of leadership, including with feedback, which is leading by example. Example is leadership.

Therefore, if you want your people to be more open to receiving feedback, whether positive feedback or corrective feedback, show them how it's done, and you can do that by making sure that in your one-on-ones you solicit feedback. Get some of those positives. It is hard for your team members initially to get used to it and share those positives with you. It will be even harder for them to share some opportunities for improvement and corrective feedback with you.

So as people inch their way forward in giving feedback, it's your reactions, your willingness to listen to them. Ask questions to understand and take corrective action when needed that sets the example of how they should be accepting and taking feedback.

Keep that in mind as you want to give others feedback. The best way to start with it is to solicit feedback and show your own receptivity to it.

Feedback is important. You most especially have to give positive feedback, make sure it's specific and the best way to get it started, it's through those one-on-one meetings for you to set an example in seeking feedback and making sure you show your own receptivity to feedback.

I love hearing from you. Keep your comments coming. mahan@mahantavakoli.com. Really enjoy those voice messages on partneringleadership.com. There's a microphone icon you can use for that. Don't forget to follow the podcast for the Tuesday conversations with change-makers and Thursday conversations with the thought leaders and those of you that listen to these on apple or Spotify, now there are ratings and reviews on both of those apps. Leaving a rating or review helps more people find the episodes and become more purpose-driven leaders like you.

I appreciate having you on this journey of learning and growth and look forward to sharing many more great changemaker and thought-leader episodes with you. As we all learn and grow together.